Over the past few months, around 400 local construction workers have tirelessly developed a resort on the private Greek island of Skorpios. Once inhabited by Jacqueline Kennedy Onassis, the island is now owned by the Russian oligarch and art collector involved for seven years.

Workers arrive in Skorpios by boat from Lefkada, their phones confiscated so they cannot photograph anything. Round-the-clock surveillance by security cameras and snipers prevents intruders from crossing. Only one cruise ship is allowed to dock on a small public beach, but only when the Rybolovlev family is not around.

Plans to transform the island into a luxury resort were first announced in 2019, when it was revealed that Rybolovlev’s company, Mykinai SA, would build a small 12-room beach hotel and nine properties in across the island. There are also plans for a helicopter landing strip, a marina for super-yachts, a football field (Rybolovlev owns AS Monaco), stables and a carousel for 30 horses, tennis courts, restaurants and spa facilities. Once the resort opens in 2024, no more than 50 guests at a time will have to pay $1 million each per week.

Yet the reality is more James Bond than Four Seasons. Accessible only by boat or helicopter, the isolated island is almost medieval in its fortress scale. There is a drawbridge connecting the nearest public island of Lefkada to Preveza, which is home to the only airport nearby. There is also a long-standing oligarchy culture among the surrounding group of islands. When Aristotle Onassis purchased Skorpios in 1963 for the inflated equivalent of $12,500, he imported his own sand and trees. Greek shipowner Panagiotis Tsakos owns the tiny uninhabited island of Atokos, and only 1,000 people live on Meganisi, including the Russian oligarch who also reportedly bid for Skorpios against Giorgio Armani and Bill Gates in 2013. But Rybolovlev has purchased a 99-year lease on Skorpios for $150 million that year, from Onassis’ last grandchild, Athina Onassis. Rybolovlev bought neighboring Sparta for an additional $30 million.

Local tour guide Jane Flinders, from the cruise ship M/S Christina, was quick to notice that Athina does not speak Greek and has only visited the island twice. Also, with no known descendants, no member of the Onassis family will remain to reclaim the island from the Rybolovlev family at the end of the lease.

Approval of the construction project – designed by the Norwegian company Snøhetta – took many years and government agencies, with a focus on job creation and environmental preservation. In 2014, Rybolovlev also donated an €80,000 state-of-the-art ambulance to Lefkada Hospital, along with other generous donations to the city and port police to show their support. There has been controversy over the banning of boat passage, but a compromise has been reached that the island trail will only be closed when visiting prominent political figures. The issue was fully resolved when the focus shifted to investing in the region.

The island is said to aim to be completely self-sufficient. It has an electricity generator, water treatment and first aid facilities, with a farm that produces fruit, vegetables, wine and olive oil. Another key selling point is the promise that, in the words of Flinders, “hotels and villas are also built as much as possible underground and covered with trees, so as not to spoil the green beauty of Skorpios”.

But between land clearing and tree felling for construction, water deepening and dredging that clears the seabed for yachts and an artificial lake, there’s a hint that perhaps the environment n is not the top priority. Could the priority be safety and security rather than aesthetics? If the buildings are underground, no one would know where they are. No aerial view would be seen by any intruders. It’s like the whole design is a panic room. 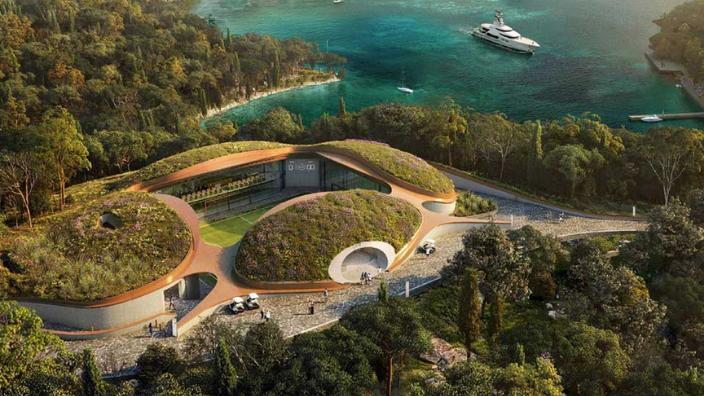 A rendering of the development plan for the island of Skorpios, which has been approved by the Central Archaeological Council Courtesy of the Greek Ministry of Environment

A number of reports claimed that Skorpios would be an “art island”. Spokespersons for Rybolovlev denied this, saying it was a misunderstanding at a press conference. The Greek newspaper Kathimerini dared that the pink villa of Onassis would be transformed into a museum. However, it was reported in 2019 that some of Rybolovlev’s art was stored underground at the Neocleous Tower in Cyprus, while 12 members of Rybolovlev’s team were stationed at Madura Holding, also in Cyprus. It remains to be seen if the art would be moved from underground installations to new ones on Skorpios.

Despite his Russian nationality, Rybolovlev is currently unsanctioned, meaning he has the ability to build relatively openly, but the rapid pace of construction still underscores just how precarious things are for anyone with connections. with the region. His superyachts are not allowed to enter Greek territory because of his Russian nationality.

Tellingly, until construction was completed, Rybolovlev’s spokesman Sergei Chernitsyn reportedly told Lefkada Press that when visiting the island, Rybolovlev prefers to sleep on his yacht.